Our time in Hanoi over, we headed next to the town of Hue, about 350 miles south. This was our first chance to experience the Vietnamese train system. Buying a ticket at the station was more complicated than it should have been. They had a ticketing system at the entrance to decide who’s turn it was to get served. After about 30 minutes of waiting, it became clear that the system wasn’t working, mainly because the two girls behind the counter were just serving anyone who wandered up. In the end I did likewise.

Despite buying our tickets a good 7 days in advance, there were no soft sleeper berths available, so we ended up on the top bunks of a hard sleeper. This turned out not too badly. Unlike the Chinese hard sleepers, which consist of open rows of three-tier bunks, submarine style, these were very similar to the soft sleepers in that each compartment had its own door. The only real difference was there were six bunks to a compartment rather than four. The beds were fairly comfy and it wasn’t too hard to get up and down from the top bunk.

However, we were sharing with a Vietnamese family who had crammed six people into the remaining four beds – four adults and two young girls. This was not an issue in itself but two of the adults (the two grandmas it looked like) thought it would be great fun to encourage the two kids stay up talking until 2am. Then, sure enough, as dawn broke at 5am, they were up and chattering again. I’m not the best early riser anyway, but that morning I was not a happy chap, especially as when we got off the train at about 9am, they were all happily snoozing away, catching up on their lost kip. Made me wish I’d packed my trumpet.

Hue itself was very nice. We only stayed there a few days, more as a stop-off on our way to Hoi An. It’s close to the old DMZ and if you’re interested in that kind of thing, there are trips available. We chose just to relax and enjoy the scenery. We were initially tempted to hire a moped to explore some of the ancient tombs around the town but despite Hue being way less busy than Hanoi, we were put off by seeing two motorbike accidents in our first day. Luckily no-one was badly hurt. A quick review of our travel insurance confirmed that neither of us were covered so the idea suddenly became much less attractive.

In place of a moped we did, after some fierce negotiation by Karen, take a boat trip up the river.

The destination was the local pagoda. 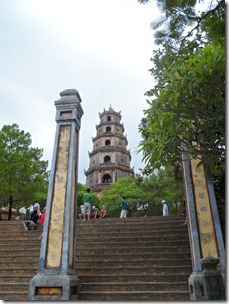 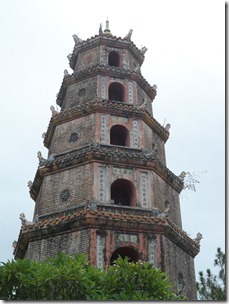 Elsewhere in Hue, we took a wander around the Citadel and just relaxed and enjoyed the peace and quiet.

Next update coming soon from the lovely Hoi An!