20th-27th July 2012
It’s been a good while since the last post so I thought I’d better make the effort before I get completely out of the habit. I guess I’ve just been having too much fun.

So, where did I leave things? After Yangshuo, we had a couple of days in Nanning before getting the bus to Hanoi. The bus to Hanoi leaves from the Langdong bus station on the east side of the city. We bought our tickets the day before (with the Yunde bus company) and turned up bright and early the next day, ready for a new adventure. The journey to the border took about 4 hours including a stop for lunch (included in the price). Getting through the Chinese border controls was efficient and quick, although strangely we were quizzed by a border guard after we’d technically left the country. Not to worry, a short minibus ride took us to the Vietnamese side (again, part of the bus ticket price – if you travel independently it’s extra.)

Vietnamese border control was, well… different. On the Chinese side it was all orderly and controlled. In Vietnam there was a window with a crowd of people pressing against the glass. After a bit of standing around wondering what to do someone took pity on us and told us we had to give our passports to the guys behind the window who were methodically working their way through the pile. Every 10 minutes or so, one of them would appear from a door with a handful of passports and shout the names of the owners. After about an hour, ours worked their way to the top of the pile and… that was it! No scanning of bags, no being quizzed by stern-faced officials, we were in.

We got on a new bus, not much different to the one on the Chinese side, comfy enough, and four hours later (including an hour waiting in the car park after just missing the previous one) we were in Hanoi.

The first thing you notice in Hanoi is the traffic. It seems as though everyone, and I mean everyone, has got a motorbike and they’re all riding straight at you. I’ve heard that Saigon is worse, so that should be fun when we get there. Unlike in China, there’s no riding on the pavements, which should be a good thing, but unfortunately neither is it to walk on the pavements because they are full of parked motorbikes. So, you have to take your chances on the road, with everything else.

Crossing the road is fun too. Attaching yourself to a local works but if non are handy, just follow the Vietnamese Green Cross Code: Look left, look right, look left again, look behind you, look above you (only kidding) and then slowly edge your way across the road, trusting that all the motorbikes will drive around you while remembering to look in every direction at once. It kind of works. Alternatively you could flag down a taxi and get them to drive you across the road (an Aussie couple we met claimed they saw this happen in Saigon.)

After getting used to the traffic, there’s plenty to see and do in Hanoi. It’s more like what I imagined Asian cities to be like – windy streets, open air markets, street food and busy, busy, busy. First stop for us was to find somewhere selling the legendary Bia Hoi – the world’s cheapest beer. 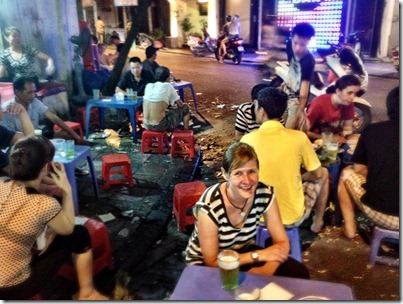 Bia Hoi translates as ‘fresh beer’ and is brewed daily. At between 10 and 15 pence per glass, it’s hard to say no – so we didn’t. A few glasses later and our whistles thoroughly moistened, the hunger took over so it was off to get some street food.

Lovely. Our first forays into Vietnamese cuisine were quite an eye opener. In our first week alone I think I’ve found half a dozen new favourite dishes, from the ubiquitous and delicious Pho to delicately spiced fish and chicken dishes and best of all, the most amazingly fresh and fragrant salads.

Our hotel was in the Old Quarter which is a mixture of the scenes above and Vietnam’s French colonial history. Most mornings we were woken up by the bells in the old cathedral. 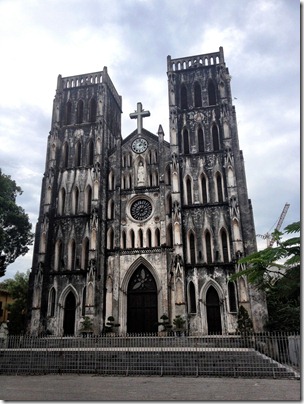 As it turned out we had a few more days in Hanoi than we first expected. That gave us time to see a few more of the attractions (like the Ho Chi Minh Mausoleum and the Temple of Literature) but due to warnings of huge crowds and man flu, we didn’t do much but relax. We did go and see the Hanoi Hilton (which was disappointing – too much propaganda…) but did get tickets for the Water Puppetry. It’s exactly what it sounds like, puppets in water and was surprisingly entertaining in a slapstick kind of way! Here’s a sample of what to expect.

Most of the rest of our time was spent wandering the streets. You never know what you might find around the next corner. A tiny dog maybe?

Or a pretty lake right in the middle of the city. 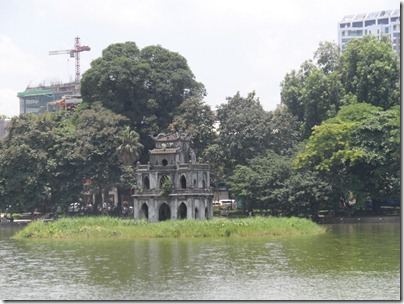 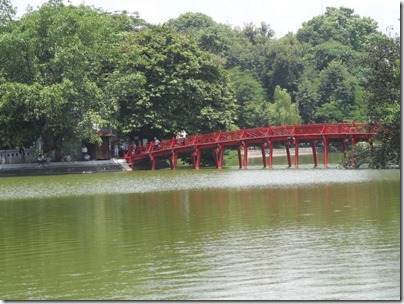 I also got my first introduction to the Vietnamese national pastime: scamming tourists. I should say at this point that we’ve found most Vietnamese to be some of the most welcoming and friendly people we’ve ever met. However, the chance to relieve unsuspecting tourists of as much of their cash as possible brings out the worst in a significant minority.

For example, as soon as any business, especially tour companies, hotels or restaurants, start to gain some success, dozens of identically named copycats immediately spring up, often right next door, preying on the good name of the original. Luckily for us we were wise to that one and made sure we had the correct addresses to hand at all times.

On my first morning in Hanoi, I was approached on the street by a man offering to repair my sandals. Sure enough, the sole was starting to come loose: a good spot so I agreed to let him do his stuff. He proceeded to sew/glue the offending flap back on and even gave them a clean. As he was doing so he made some small talk – where was I from, how long had I been in Vietnam? When I replied that this was my first day I could see his eyes light up thinking that I’d have no idea how many Vietnamese Dong there are in a pound. Sure enough, when it came to paying he tried to charge me 800,000 Dong. Or about £25! Mmmm, seeing as they only cost me a tenner that seemed a bit steep. When I queried this amount, he gallantly offered to drop the price to 750,000 Dong. I gave him 20,000 (still an overpayment!)

Full marks to him for trying though and a lesson learned for me: always agree a price up front!

Fraudsters aside, we’re loving Vietnam so far. So much so I’m falling behind on the blogging. Hopefully over the next few days I’ll be posting updates from Halong Bay, Hue and Hoi An so look out for those.