6th July 2012
As if the Avatar-influenced National Forest Park wasn’t spectacular enough, Zhangjiajie wasn’t finished there. To the south of the city lies Tianmen mountain, famous for it’s huge natural cave, cutting a hole through the mountain big enough to see from the suburbs. More on that later.

Talking of the suburbs, just to the south of the town centre is the cable car station. Billed as “longest passenger cableway of high mountains in the world” – a suspiciously precise definition – this is easily the longest cable-car ride I’ve ever been on. It takes you over the outskirts of the city, across rice paddies and fields before finally striking steeply up the mountain-side. 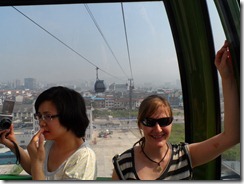 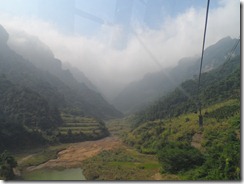 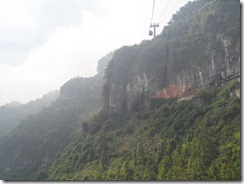 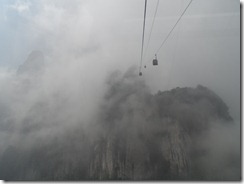 I would say that the views are incredible, but I’m afraid I’ll run out of superlatives too early, so I won’t.


The top cable-car station is pretty close to the top of the mountain. If you’re in a rush, you can take a tunnel straight to the Fairy Peak. There’s plenty of time to see everything in a day without rushing though, so we decided to head round the mountain along the East Path. A lot of the path is along what they call ‘plank roads’ but they’re actually more like concrete. Just as well pretty otherwise it would be pretty hairy.


And the views? Well, see for yourself. 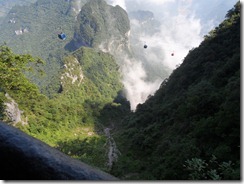 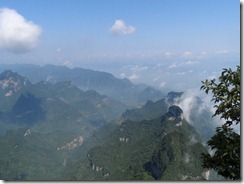 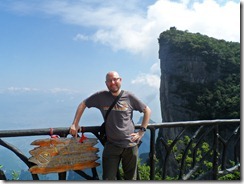 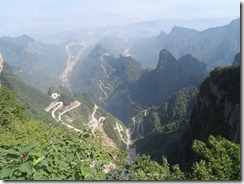 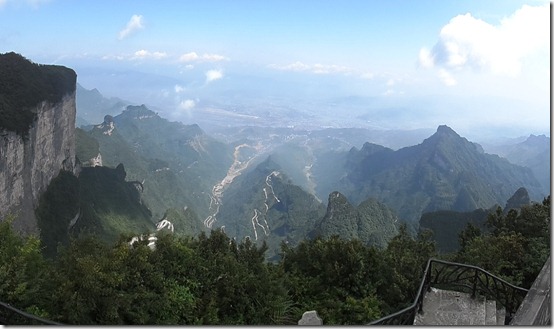 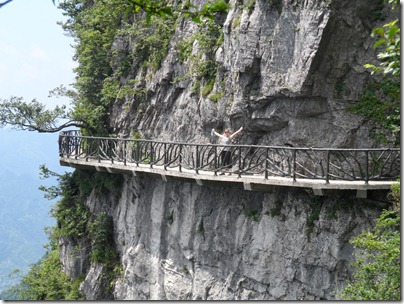 About an hour round the East Path, you arrive at a temple and a chair-lift up to the Fairy Peak. The temple is nice if you like that kind of thing so we had a spot of lunch before trying the chair-lift. 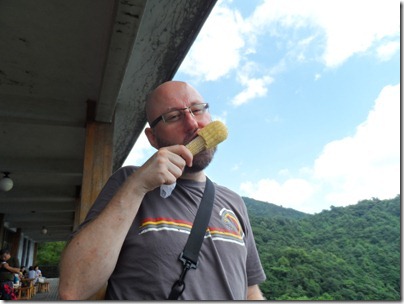 A minor word of warning – we got fleeced out of a few pounds because, although there are return tickets available, the kiosk at the bottom doesn’t have them. So if you want to go down once you’re up, it’s two singles. I tried complaining but I didn’t know the Mandarin for, “Don’t you know who I am?”

Not to worry, it was worth it anyway. They’ve built (almost finished) a pagoda at the top for even better views. 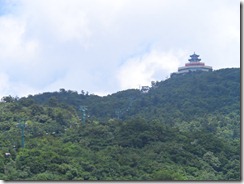 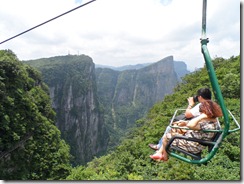 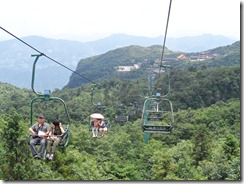 We headed back from the temple area along the West Path. More amazing views and precipitous walkways: 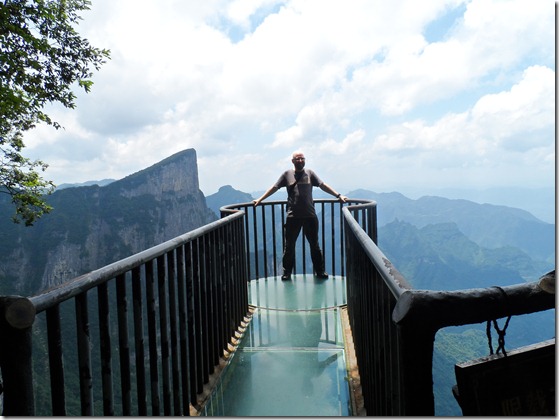 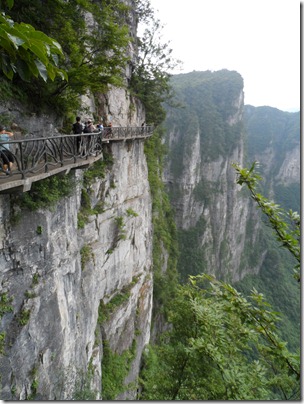 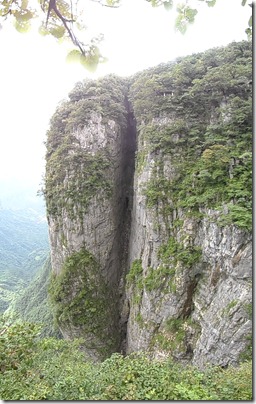 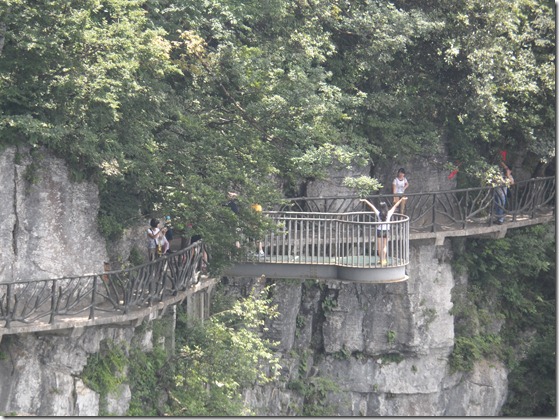 Almost back at the cable-car station was the bit I’d been waiting for – the glass walkway! As if the plank roads weren’t scary enough, the crazy Chinese have built the same thing out of glass. After paying a small fee, I donned my polishing slippers and set forth. 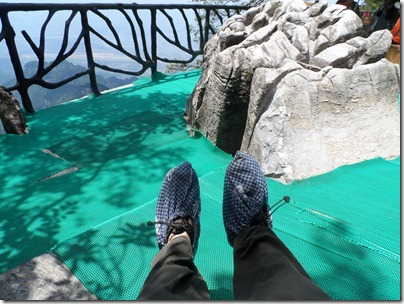 After the initial shock, it actually wasn’t that bad and again, the views were beyond belief. 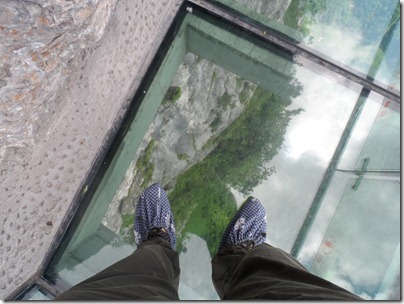 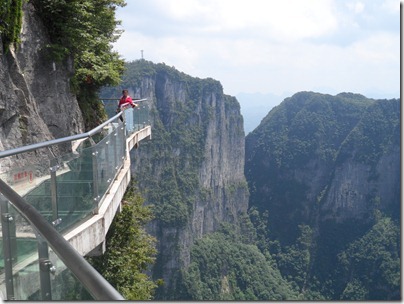 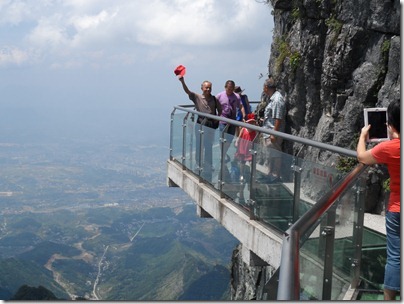 And finally, it was time to take the cable car back down. But not all the way – the mountains wasn't finished yet. Remember the cave I mentioned? Well, a short way down the mountain, there’s another cable-car station where you can get off and start the trip back up the hill to the cave. There’s a bus that takes you most of the way – there’s supposedly 99 bends in the road, but luckily 40 of them are below the cable-car stop. 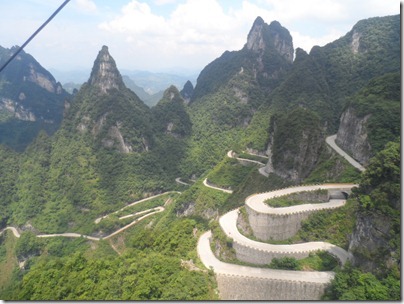 Once the bus drops you of, there’s just the small matter of 999 steps to get up to the cave. 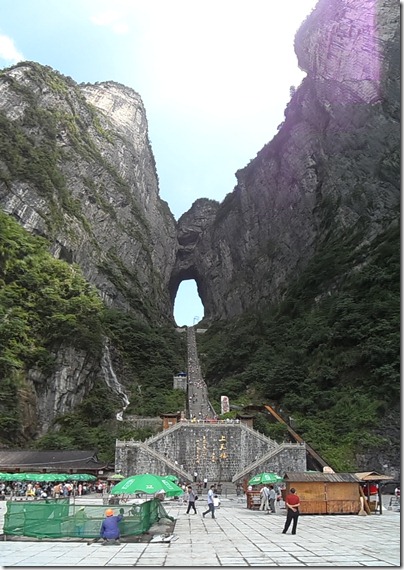 Trust me, there really are 999 steps – I counted them. I actually counted 1002, but to be honest I may have lost count in the last 150 due to oxygen starvation. 999 steps is a lot. It’s steeper than it looks from the bottom too. 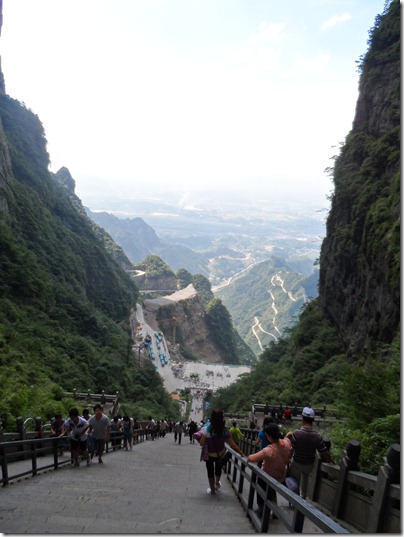 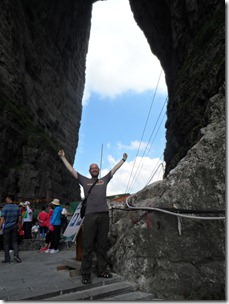 And that, apart from a tired stagger down 999 steps, was that.

It’s a close run thing with the National Forest Park (see previous post) but I have to say that Tianmen mountain is my favourite place in China so far.

On this evidence, it won’t be long until it get’s a much higher profile in the Western guide books and tour groups. I only discovered it via a forwarded email from a friend of the mother of a friend (thanks Adam).

If you happen to be planning a trip to China any time soon, make sure Zhangjiajie is on your list. 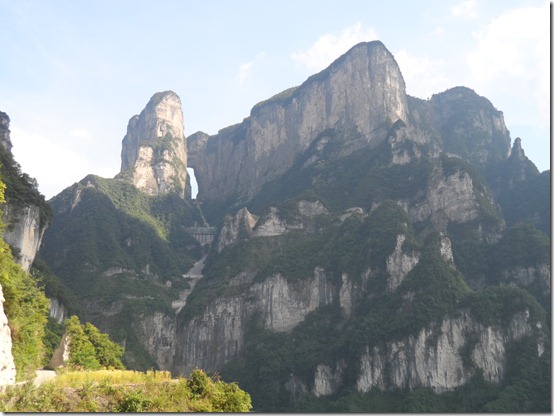 One final thing – I know this post is photo-heavy, but there’s loads I missed. Take a look at the photos link on the right for more amazing scenery – some of them make great desktop wallpapers.