A Tale of Two Tours: Part 2 - The Mekong Delta

While the tour of the Cu Chi tunnels could be described as cheap and cheerful, the two-day Mekong Delta trip definitely was not. It was organised by Karen as semi-surprise present for my 40th birthday. And what a great present it turned out to be!

We were picked up at 7.30am from our hotel by our guide Anh and whisked off in a private car (driven by Mr. Nam). While the cheaper coach tours travel by the main highways, our route took us via the local roads which meant loads more to see and more stops.

Our first destination was a local market. Not many foreigners come this way so there was lots of curious stares and even some impromptu Vietnamese lessons from the seafood sellers. We also got to choose whether we wanted chicken or prawns for lunch.

A couple more visits to buy ingredients for our lunch: first some grated papaya.


And finally, some fruit of our choice, to be consumed later as a lunchtime dessert. In this instance we chose some mangosteen, a soursop and a durian.

One of the things that attracted us to taking this tour was how much stuff they pack in. We hadn’t yet hit 8.30am and we were off to our second short stop at a furniture manufacturers. It was interesting enough but not really our bag so no photos.

Next up, another short stop, this time at a chilli farm. They prepare and sell chilli seedlings to local farmers. It’s an amazingly painstaking manual process.

Firstly they create tiny bamboo pots, fill them with soil and put a single chilli seed in each one.

Finally, when they’re ready they’re sold to the farmers to put in the big fields. Each tray holds hundreds of pots, all individually planted.

Another short drive and it was time to get a bit closer to the countryside. We mounted our bikes and set off into a maze of rice paddies in the crystal clear morning sunshine.

The next photo looks like an abandoned, half-built hotel, but it’s actually an artificial roost for the birds who’s nests are used to make birds-nest soup.

In the first of many challenges casually thrown our way by Anh, we were persuaded to cross an irrigation channel over this monkey bridge.

Back to the bike-hire hut for a some more refreshments, this time some freshly-pressed sugar cane juice – delicious!

My last activity before being whisked off to lunch was being comprehensively beaten at billiards by that kid’s big brother. (I say ‘big’ – he was still only 8 or 9.)

Finally, lunch and the beginning of a concerted assault by Anh to ruin our waistlines. First up were the prawns, huge and juicy. Then some clams, steamed with lemongrass. Having been up for 6 hours with only a piece of banana-bread to line my stomach, I was starving, so I piled in.

Big mistake – this was just the appetiser.

Out came a huge bowl of fish stew/soup and three clay pots of sizzling caramelized fish (with rice on the side). At that point Anh reminded us that, in Vietnam, it’s rude to leave any food. But if you do manage to finish, then the host is then obliged to bring more food out. Catch-22. I managed to plough my way through most of it before accepting defeat and with it the risk of offending the hosts.

If you’ve never come across durian before, it’s renowned for smelling like rotting flesh but supposedly tasting like ambrosia – as long as you don’t mind your food-of-the-gods smelling like the devil’s armpit.

Earlier, when I pointed to the durian in the market, Anh got quite excited. Apparently they have an unofficial competition between tour guides on who can persuade the westerners to try the full gamut of stinky Asian food. So far, none of them had scored a durian so this was her big chance.

I can confirm that it is indeed pretty stinky. Despite being double-bagged, after two hours in the car there was a distinctly ripe aroma. That’s why durian is often banned on public transport!

Having said that, the smell wasn’t all that bad. It wasn’t rotting flesh as such, more like very, very ripe fruit. Put it this way, if you opened your fridge and this smell came out, unless you’d just bought some durian, you’d definitely be checking the back of the salad crisper for forgotten cabbage.

As you can see from the photo above, the edible part of the fruit looks like some kind of unidentified giblet. So, with nothing going for it in the looks and smell department, what about the taste?

Despite the evidence of my own face, it actually wasn’t bad. The texture was a bit like custard and the taste was quite sweet with a weird hint of onion, not unlike a ripe papaya. It wasn’t great but it wasn’t disgusting either. The Marmite of fruit, perhaps. Be warned though, it repeats on you for hours...

It was then that I made my second mistake by asking Anh what other unusual Vietnamese foods were on her list. Nothing much apparently, just some duck eggs. “Everyone who tries them loves them,” she told me. “You’ll try them too, yes?”

Again, I couldn’t really refuse without feeling like I’d somehow be surrendering my manhood. How bad could they be? More on them later.

After lunch we had a short drive to the wharf and our first taste of the Mekong itself. Before we boarded I noted to Anh that there were hundreds of dragonflies circling above the quay. “That means it’s going to rain,” she said.

Things started out pretty calm but less than 10 minutes later, as you can see from the photos, the heavens opened.

Despite being in head-to-toe rubber ponchos, we were thoroughly soaked. The Mekong bites.

Luckily, the trip was quite short, across the bay and up one of the smaller channels. Then it was back in the car and off to our hotel for the night at Can Tho.

Just in case we were peckish, we had some Vietnamese cherries bought from the market earlier. They were quite sour but really good with some chilli salt.

At a rest stop, Anh also bought us some delicious ‘polished pork’ snacks. These were cured raw pork, seasoned with a sweet basil leaf (I think) and some chilli, then wrapped in a banana leaf.

And as soon as we emerged from our hotel, the eating continued. First, Anh took us for some wraps.

We also picked up a couple of the infamous duck eggs here. I should mention now that if you’re in any way vegetarian, you might want to skip the next part. For these were no ordinary duck eggs, they were special duck eggs: each yolk came with a beak.

You may have heard about Asian people’s penchant for fertilised duck eggs. I first came across them watching an episode of Fear Factor many years ago. I thought at the time that the programme makers had to go somewhere special to find the eggs, but no, they’re on every street corner. If you see white duck eggs for sale, you can bet they'll be fertilised.

By now, I was in way too deep to refuse – I couldn’t even hesitate. “First you break the top and drink the juice,” Anh instructed. So I did. To be honest, had my wife and a 20-year-old Vietnamese girl not been watching, I might have chickened out at this point (no pun intended).

Then you just peel the top, sprinkle a bit of salt on top and get busy with your spoon.

So, what are they like? Actually, not bad. Taste-wise, they’re like chicken omelette, consistency-wise, like chicken omelette. There were a couple of bones (yes, and a beak), but nothing like what I had imagined. It’s not a food I’d go searching for in future, but if I was offered one again, I’d be happy to eat it.

But the fun wasn’t over yet. A quick bowl of noodles and we were back on the street. Earlier I’d mentioned that I loved street food so off we went passing stalls selling barbecued eggs, grilled skewers and various pancakes. We stopped at a stall selling banana and pineapple pancakes, grilled over an open charcoal fire.

“Look how it’s done,” Anh said before starting a conversation with the owner in Vietnamese. I should have paid attention because next thing I knew, the owner disappeared.

It’s harder than it looks, believe me. Apparently my ham-fisted attempts were causing much hilarity with the watching locals. Incredibly I managed to avoid dropping it in the fire. I must have been doing something right because another local appeared and started asking me how much my pancakes cost – she must have thought I was a visiting celebrity chef!

And that was the night over, oh, apart from a snail nightcap.

The next morning we started bright and early (5.30am) for a dawn trip on the Mekong to see the floating markets. Few tourists get up early enough to see these as the bigger boats get there too late for the action. As promised there was plenty of fruit and veg getting thrown across the water.

The boat owners advertise their cargo by tying a sample of their wares on a pole so the buyers know where to go. 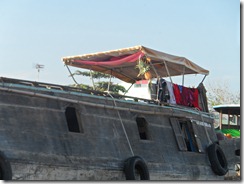 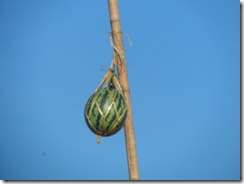 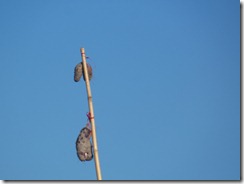 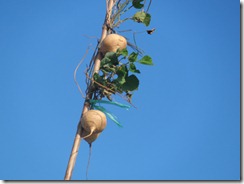 Then all we had to do was enjoy a peaceful cruise as the sun rose over the beautiful scenery.

That’s a lot to pack in before breakfast!

Later that morning we stopped briefly at a Cao Dai temple – a weird cross between Buddhism and Christianity as far as I can make out.

Then it was on to our final stop, the Tra Su bird sanctuary near Chau Doc. After a quick lunch, we boarded a flat-bottomed boat and explored a huge, forested lake carpeted with lilies and home to various species of large bird.

We then swapped boats for a oar-powered trip through the neighbouring mangrove swamps.

Finally, it was all over. There was a short delay on the journey to Chau Doc while we negotiated round a herd of geese.

If you’re ever in Saigon and fancy a Mekong Delta tour, I can heartily recommend this one. It wasn’t the cheapest (but not the most expensive either) but it was easily worth the cost (I’m not allowed to know exactly how much as it was part of my 40th birthday present from Karen).

Our guide, Anh, went above and beyond to make sure we had a really special time. A big thanks to her and Water Buffalo Tours for the perfect tour.

And of course an even bigger thanks to Karen for treating me to a wonderful couple of days. It was probably the best tour I’ve ever been on and certainly something I’ll remember for the rest of my life.