While taking the train is all very well, when you’re on a tight schedule and you need to get from Koh Samui to Chiang Mai, planes beat trains by about two clear days. It’s just as well we did fly because we arrived to reports of severe rail delays due to flooding north of Bangkok. But events were to prove that it was way too soon to be laughing in the face of the water gods...

We stayed in Chiang Mai for about a week, waiting for our Indian visas to come through, but my parents only had four days. Some of that time was spent relaxing in our nice hotel.

The main event for us in Chiang Mai was the visit to the BaanChang elephant park, split over two days: day one, the elephants and day two, a walk up to a waterfall and then some white-water rafting.

There are dozens of elephant parks around Chiang Mai. We chose BaanChang because it doubles as a sanctuary for domesticated elephants (as opposed to wild elephants) and is funded by tourists like ourselves. Apart from a couple of new births, almost all the elephants have had to be bought from the original owners (sometimes costing as much as £50,000!) Sadly, some of these animals have been abused in their previous lives and bear scars from elephant hooks and machetes. Unfortunately, like all domesticated animals, they’re no longer capable of fending for themselves in the wild so BaanChang (which means 'Elephant Home') gives them a safe place to live and work.

We arrived at the park around 9am and were told to don our blue denim ‘Mahout’ uniforms.

A Mahout is what they call the elephant handlers – there’s one permanent Mahout for each animal. The uniforms were dual purpose: to protect us from dirt and scrapes but more importantly, the blue colour is recognised and trusted by the elephants – the last thing you want to do is annoy an elephant.

Our first job was to give the animals their mid-morning feed – sugar cane and bananas.

Then it was time for lessons on how to command the elephants. Before you ride them it’s good to know the commands for ‘stop’, ‘go’, ‘left’, ‘right’ and ‘sit down’ ('hao', 'pai', 'kuay' and kick right ear, 'kuay' and kick left ear, and 'non loong', in that order.) Then we all got the chance to take an elephant for a quick trip round the tree to practice what we’d learned.

After lunch, it was time to take the elephants for their daily walk through the jungle. 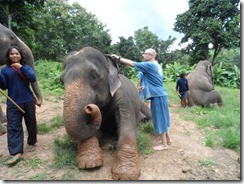 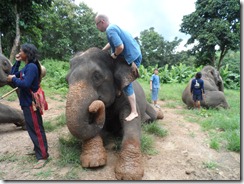 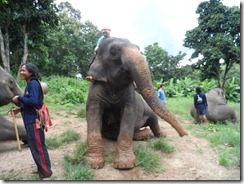 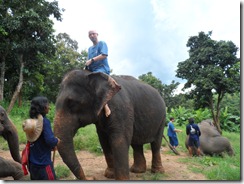 How to get on an elephant - easy!

If you’re wondering why there are no photos of Karen on an elephant, it’s because she opted out. Apparently she used to work in a cake shop in Nuneaton when she was a teenager and had a bad experience with some buns and an elephant that wouldn’t take no for an answer. She’s not trusted one since.

Finally, after an hour or so gallivanting through the forest, the elephants needed a drink and a wash. A Mahout’s work is never done.

Getting close to and spending some time with these magnificent beasts was a truly wonderful experience. They’re huge animals – you really get a sense of their raw power when you’re sitting on the back of one – and yet they’re very graceful and have distinct personalities. It’s hard not to get completely enchanted by those huge eyes and long eyelashes!

After we’d showered, we had a delicious dinner and as the sun set, gathered round the campfire for songs, magic tricks, dancing and laughter fuelled by some vicious-tasting rice spirit (which got better as the night went on…) These Mahouts sure know how to party.

Before we all retired to our rooms, our hosts brought out some floating lanterns for us to release into the night.

Then next morning, after breakfast, we were bundled into the back of a jeep for our ‘adventure’ day. It turned out to be more of an adventure for me than I’d imagined.

The morning’s activity was a hike up to a waterfall. It was slightly more challenging than we’d expected due to the fact that the waterfall feeds a river, which the path followed and at various points, crossed. Normally this wouldn’t be a problem for a young and fit specimen like myself but I’d only brought a pair of Crocs (or cheap Chinese copies) to wear on my feet. These had no grip. This was fine stepping on rocks and sand, but some of the crossings were on wet logs which for me might as well have been sheet ice.

I was 90% across one particular log when my left foot slipped. “Not a problem,” I thought as I fell, “I’ll just stick out a leg and stop my fall in this no-more-than-shin-deep water.” Shin-deep turned out to be James-deep.

I went completely under.

Luckily I’d had the foresight to wear my swim shorts that morning so after rescuing my bag and avoiding being swept downstream, I clambered out with nothing hurt but my pride.


Although I was now soaked from head to toe, I bravely carried on. I guess I'm just that kinda guy.

When we got there, the waterfall was well worth the effort.

I somehow managed to make it back down without falling again. I wasn’t safe yet - the water gods weren’t done with me. After we had lunch it was time for the white-water rafting…

Apparently, September is the best time of year to go rafting in Chiang Mai, because the monsoon season guarantees the best white-water conditions. In hindsight, perhaps not the best time to try the sport for the first time. The first bit of water was exciting, but nothing too strenuous. Because the waters were so high, they made us disembark and walk between jetties because one section was just a bit too mental. I should have noted the warning signs. The second section was slightly more challenging, but nothing too difficult until our boat captains steered us straight into our first medium-sized wave.

Completely unprepared for it, I was unceremoniously pinged pung launched out the boat like a champagne cork. Suddenly I was experiencing white-water rafting ‘sans-raft’ which is quite exhilarating, let me tell you. Unless you’re my wife and parents, who were treated to the distressing sight of their husband and eldest son disappearing (albeit briefly) under the frothing waves.

Luckily, due to the recent rains, the river was quite deep, so I wasn’t in much danger of hitting any rocks. Although it felt like longer, within seconds the boat captains had brought the raft around and I was being hauled back aboard by them with the help of my Dad. Panic over!

Kept hold of my paddle though.

For the record, I’d like to state now that I hold the water gods, whoever they might be in the highest esteem and if they ever got the impression in the past that I was somehow mocking them, then I unreservedly apologise. Point taken.

Back to Chiang Mai and we made sure the next day was explicitly excitement-free. Then, finally, it was time to wave good-bye to Mum and Dad.

I think they enjoyed their holiday – it was a bit hectic as we’d packed loads in, but it was lots of fun and it was great to share a piece of our travels with them.

Next time we’ll do something a bit less exciting, I promise!

Next stop: Laos and the slow boat to Luang Prabang