So, our oh so brief visit to Japan was over. All that remained was to catch the ferry from Kobe to China.

We sailed with the China Express Line to Tianjin. Almost as soon as we got on the boat, we were no longer in Japan. We were the only westerners on board and our fellow shipmates were almost all Chinese. The first thing we noticed was the volume had been turned up to 11. The Chinese it seemed love to talk, dance, smoke, play cards and watch soap operas, all at full volume. Here, for example is some of the female contingent engaging in a spontaneous dance class on deck. 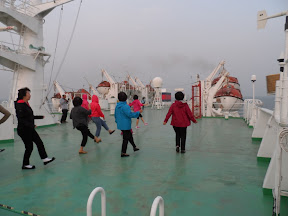 For all the boisterousness, the voyage was very relaxing. We splashed out on the deluxe room. To be honest it was showing its age and could have done with a thorough clean. But that's compared to Japanese standards. It was comfy enough for a few days. There's more photos of the boat on Skydrive if you're interested.

The route threaded it's way through Japan before cutting across the East China Sea. 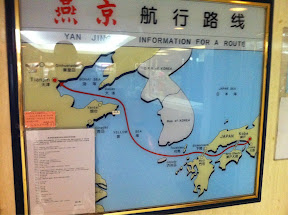 On the first night, after passing under the Akashi-Kaikyo bridge there was a beautiful subset to enjoy. 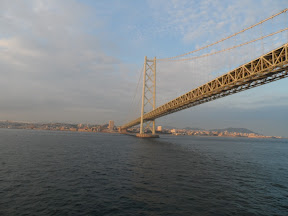 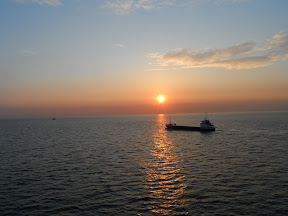 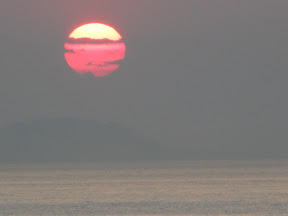 The next morning we headed down to the restaurant to try the free breakfast. If steamed bread, boiled sausage and rice gruel are your thing then you'd have loved it. Me? I was glad we'd stocked up on Japanese pot noodles.

That day on deck we said a final goodbye to Japan by committing our final yen to a watery grave. 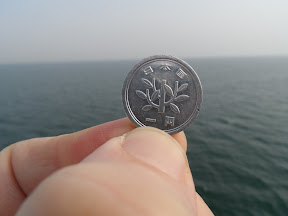 After one more day of relaxation on flat calm seas, we finally arrived in the port of Tanggu. 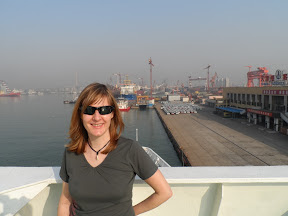 After a one hour delay while the Chinese dock workers fannied around deciding which steps to use we eventually set foot in the middle kingdom. With the air of veteran travellers, we confidently strode past the taxi drivers outside the terminal. After failing miserably to catch a bus, cue a brisk three-mile walk to the train station with full bags in the baking late morning sun. China lesson number one: everything is 3x further than it looks on the map. One 30 minute journey to Tianjin, another walk to Tianjin main railway station via some kebabs... 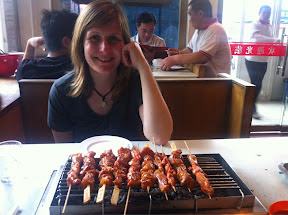 ... and we were on the bullet train to Beijing.