A trip to Xi’an wouldn’t be complete without visiting the Terracotta Warriors. I’ll be honest, although I was aware of them, I had no real idea what they were, how old, who made them etc. Also, not being a big fan of museums, I wasn’t expecting too much, so I was pleasantly surprised.

Although it’s perfectly possible to get there under your own steam, having negotiated our way to Huashan the day before, we decided to go for the easy option of a guided tour. It wasn’t much pricier and turned out to be a good decision. Our guide was a tiny Chinese girl who expertly marshalled our motley collection of assorted Westerners. On the way there (a 1hr bus ride) she gave us a bit of background on the warriors, followed by a quick quiz to check we’d been listening. She definitely kept us on our toes (“my Chinese name is ‘Zha Zha’, my English name is ‘Lady Zha Zha’”).

One of the benefits of having a guide was she’d designed the tour in reverse, so the best bits were saved until last. First off was the site of Emperor Qin Shi Huang’s tomb. In Zha Zha’s words, “ you can’t go in because of mercury poisoning, so it’s just a hill – nothing to see.” 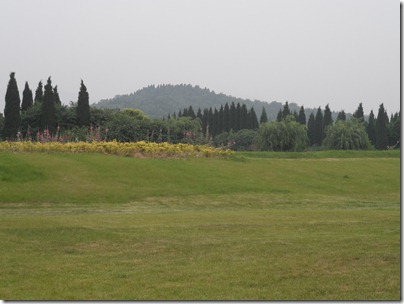 That hill in the background is Emperor Qin Shi Huang’s tomb – no, really.

Emperor Qin Shi Huang ordered the Terracotta army to be built to make sure he would be well protected and wealthy in his next life. He was, as we say in the UK, a nutjob.

Next up, the main event, the warriors themselves. They were first discovered in 1974 by a farmer (Yang Zhifa) while digging a well. They’re split up into 3 halls. We started in the least impressive, Hall 2. Despite that, this is where the only complete warrior ever found is housed (the rest had to be remade - like the world’s hardest jigsaw). Here he is, the magic archer. 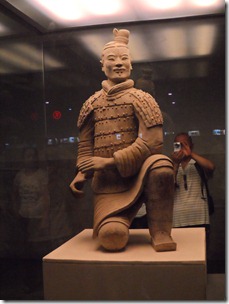 In case you’re wondering why this is a strange pose for an archer, it’s because they were almost entirely crossbowmen, no longbows here.

Next up was Hall 3, the headquarters of the army. This is where the Generals and Officers are found. 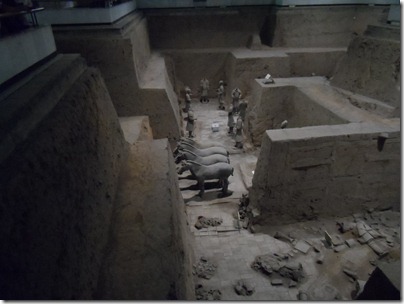 The horses apparently used to have a chariot behind them. All very interesting but we were quickly whisked to the main event, Hall 1. This is where the infantry were found. To date, about 8000 warriors have been found, of which only 2000 have been put back together. Here they are:

Re-assembling the rest will take decades, and they keep discovering more. Although the legs and torsos were made from moulds, the details on the clothing and the facial features are all individualised. Apparently, as soon as the face was complete, the worker was executed. Nice.

Seeing this reminds me again that while we westerners were still rubbing sticks together, other civilizations were achieving amazing things. These were buried more than 2000 years ago. It also tells me that the Pharaohs had some competition in the crazy megalomania stakes.

Still, it was all pretty awe inspiring. It was a shame it all had to end with a very ropey “360 degree film” which seemed to have been made, bizarrely, before the terracotta warriors were actually discovered.

Now, I’ve you’ve been paying attention, you’ll be wondering what happened to the farmer that first discovered the warriors (you have been paying attention haven’t you?). Well he got 10 Yuan (about £1) at the time. Not much you might think, but who should we see eating his lunch in the visitor centre? Yep, Yang Zhifa himself. Add 38 years of free lunches to the total. Not bad going.

Talking of lunch, we stopped by a local eatery on the way back and had an excellent feed for only 30 Yuan. Caramel potatoes – yum!