Before we leave Pingyao, there's just time for a quick note on the local food. The two local specialities are the Pingyao noodles and the Pingyao beef.

We had the noodles at a local eatery on the first day. They were cut straight into the pot from freshly made dough. As noodles go, they were pretty good.

A bit more interesting was the beef. According to legend, a local chef, dismayed that his good beef had started to go off, on a whim decided to see if he could save it by salting it for 3 months and then boiling it for 12 hours. The meat was transformed and Pingyao beef was born. 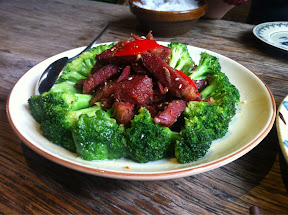 We couldn't leave without trying it. Apparently they no longer start with rotten meat, which is a relief. The meat was really succulent, salty, but not overly do. It's a bit like what I imagine corned beef should be like, if it didn't come from a tin. I'd definitely have it again.

Finally, although not necessarily a local speciality, twice here we've had the braised river carp. 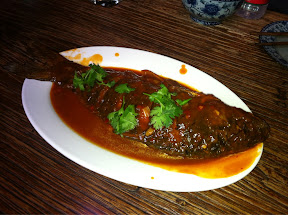 There's no attempt to fillet it, you have to pick the flesh up with your chopsticks. Ive never had carp before. It tastes quite delicate, but meaty too. Ours came in an excellent sweet and sour sauce. I'll be looking out for similar dishes as we visit other places. It's really good.

That's it from Pingyao. Next stop Xi'an.