On day 3 in Shanghai (over a week ago, now – I must try to blog quicker), the weather brightened up a little so we set off for the French Concession. Although not quite gay-Paree, the French influence is definitely there to see. Tree-lined boulevards and lanes are dotted with up-market boutiques and there’s even the odd coffee shop. Unfortunately for you lot, we weren’t in the photo-taking mood, so there’s not much eye-candy to show off.

Apart from general pootling, I finally cracked and decided to do something about my iPhone. You might have noticed that the blogs this past week, while not necessarily bang up to date, have at least been more frequent and a touch more… ornate?

The reason is this little chap. 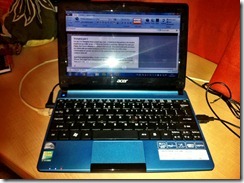 He’s an Acer Aspire One and I picked him up real cheap in one of the cyber-marts near Xujiahui metro station.

Why? Well, after five weeks of trying, I finally realised that the iPhone 4, or more particularly, iOS and a touch screen interface, just doesn’t cut the mustard. It’s fine for the occasional web browse and replying to the odd email, but for anything more serious, it’s just too frustrating. Trust me, there’s nothing more infuriating than losing an hour of blog post because the app crashed and didn’t auto-save properly, or having to wait an hour for picture to upload over a slow Wi-Fi link, unable to do anything else because the bloody OS doesn’t do proper multi-tasking. Add that to the list of other annoyances e.g. not enough storage, crippled web browser etc., and I couldn’t stand it no more.

Anyway, I’m really happy with my new friend, he’s really light and pretty nippy for a netbook. It’s so nice to be using a keyboard again.

So, getting back to the travel blogging, we spent our final day just relaxing around the French concession again. We headed for the Shikumen Open House Museum, a really interesting look at the way Shanghai’ers used to live at the turn of the century. Essentially, they lived in tenements. Most of them have been torn down in favour of newer accommodation, but the area around the museum has been partially preserved and redeveloped. We had a couple of Japanese-priced wheat beers at the local Paulaner Brauhaus – they were really, really good. Good job they were so expensive.

After that we were understandably hungry so we popped into the Thai restaurant round the corner. I didn’t want too much to eat so I ordered the green papaya salad (Karen had Pad Thai). It briefly mentioned on the menu that they could make it less spicy for western palates. “Ha! Western palates, I’m a traveller now, I can take it,” I thought. Who would have believed a green salad could be so painful. It was simultaneously the most excruciating and most delicious meal I’ve ever had. Chilli does strange things to the human mind.

So that was Shanghai. It was a welcome change to the huge, wide, grid system cities we’ve seen so far. It’s obviously been influenced by it’s western colonial past and it shows. I thoroughly enjoyed my time there and would certainly go back, four days isn’t really enough for a city that size.

I’ll leave you with a couple of shots we took on our way back from beer and stupidly hot salad. 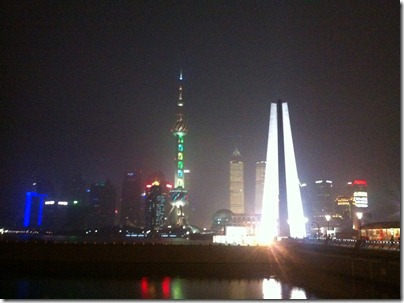 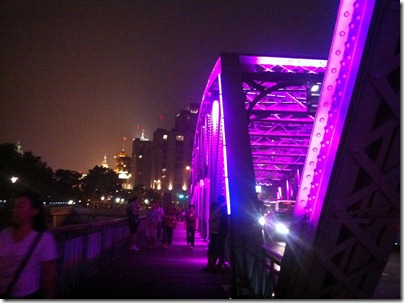 Waibaidu bridge built in 1908 (just outside out hotel)