So, I’m running slightly behind in my blogging duties. We were actually in Xiamen over a week ago, but I got slightly caught up in having fun and relaxing in Hong Kong and Macau. Now we’re back in China, in Guangzhou to be precise so I’ve got loads to catch up on.

More on that later, what about Xiamen?

Xiamen used to be called Amoy. “Cool,” I thought, “I’ve heard of that.” Then I remembered it’s because I used to buy Amoy soy sauce from Tesco. Nice to be reminded of your own ignorance every so often.

We stayed at the Ibis hotel next to the train station – cheap and functional, but little else to recommend it. Although we were a couple of miles away from the harbour front there was a handy and very cheap (5p each way) bus transit system. The harbour, and Gulangyu island are where you probably want to head to if you’re ever in Xiamen.

Unfortunately for us, it was raining. Being in the tropics in rainy season, it wasn’t unexpected, but we wanted to see Gulangyu in the sunshine so we had to spend our first couple of days just wandering around the harbour, going to the odd museum, eating frogs, and trying the local delicacies: bayberries and garlic yum-yums.

Finally, on our third day the weather broke, so it was off to Gulangyu.

There are no cars allowed on the island so it’s very pleasant to walk around. The architecture is very much influenced by it’s European colonial past. 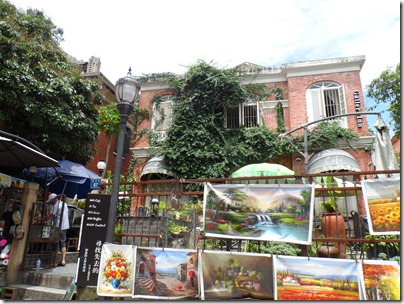 Gulangyu buildings – could be somewhere in London 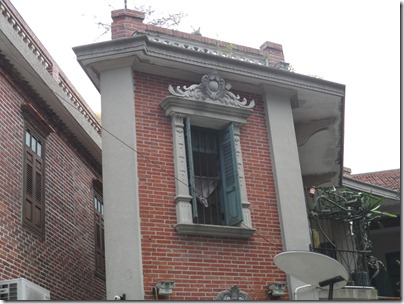 Paris in the springtime? Nope, China.

We sauntered around for an hour or two, took some more nice photos of buildings (check the link on the right) and had a spot of lunch. Before getting the ferry back, we wandered along the sea front to see what this bloke was up to. 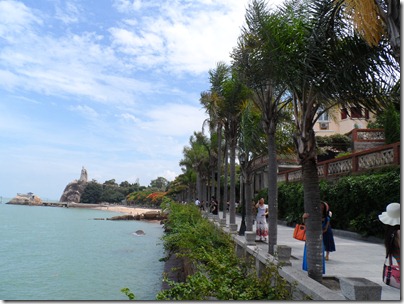 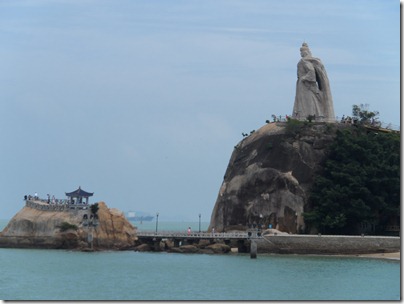 We’d have got a bit closer to find out but the local authorities have decided to charge extra for that bit and because we’re on a budget, we declined. If you’re interested, he was some chap called Zheng Chenggong.

That’s about it for Xiamen – worth visiting, but I avoid the rainy season if you can!

Stay tuned for more stories and photos from Hong Kong, Macau and Guangzhou…